Zum Inhalt springen
The Kinlochleven Enduro is commonly agreed to be the most challenging Enduro race in Scotland. It’s steep and rocky, wet and muddy, technical and fast. Scottish riders tell you: “If you can ride in Kinlochleven, you can ride anywhere in the world!” So, this would make for an epic Enduro race to participate in, right? In July? No, wrong, in November, in SCOTTISH November! (The reason for this is that in July there would be too many midges in Kinlochleven, not a very pleasant thought to be eaten up by those creatures… Well, November it shall be then.)

Hans didn’t have any experience riding in Scottish conditions, while I could at least practice a little bit over the past few months that I’ve lived in Edinburgh. However, he had done mountain bike races before, whereas for me, Kinlochleven would be the first race ever. In fact, I had only started mountain biking exactly one year ago. These preconditions would make for an adventurous and challenging weekend of racing in the Scottish highlands and the event organized by NoFuss did not disappoint!

Saturday was practice day and most of the riders biked up the 800m of altitude in order to practice the difficult parts of the three different stages. Equipped with matching bikes, as well as matching dirtsuits in bright green, we pedaled up these hills, first on a tarmac road, which soon turned into a gravel road, and finally into a trail that could hardly be considered as such. Due to extreme wetness and puddles all over the place, our shoes were soon soaking wet and I once managed to stand knee-deep in the water. This in itself was quite different to the mountain biking we’re used to in Freiburg.

The race was divided into three different stages and all of them were different, but equally challenging. Stage one scared everybody because of its steep and rocky passages. Most of us crashed at least once and it seemed impossible to ride the whole part in one go. We practiced the key passages a couple of times, hoping we would remember our lines for the race on Sunday. Hans was slightly discouraged after the practice, having the impression that the Scottish guys were so much better. Well, no surprise, this is where they grow up, this is what they are used to.

When we woke up the next morning, the peaks of the surrounding mountains were covered in fresh snow and it was unforgivingly cold. Well, it’s November after all. Nonetheless we were excited for the race! I was nervous and didn’t really want to have any breakfast, but the day would be long and energy needed. Thinking about stage one left me slightly scared and I really hoped to make it down this mountain in one piece.

After we were handed out our timing chips, we started our uphill ride at 09.20am. By now, everybody had seen these Germans in their green onesies and riding the same bike on top of that. Our motto: “Bevor wir fallen, fallen wir lieber auf!”

When we reached the starting point of stage one, my nervousness climaxed but it gave me a good feeling that Hans would go first and then wait for me at the end of the stage, before continuing with the second one. When he had left, I waited for 30 seconds, before dropping into the first race of my life. But I had absolutely no time to think about this, as the first technical passage was right in front of me. To be honest, I was not very happy with my performance in stage one, I did much better on practice day. Hans on the other hand seemed to have been quite fast, without any major mistakes. A part in which he crashed on Saturday was taken in one go by him and he raced down the mountain towards the end of stage one. 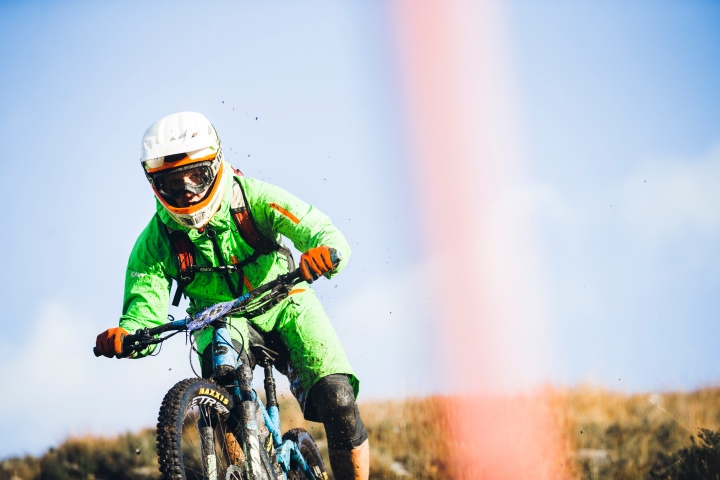 Stage two was not as technical, but very challenging on the cardio. The trail had several uphills which really made you breath heavily, but this was also the stage where you would be able to get some good times! I pushed through as hard as I could, but the uphills were longer than I remembered from the day before. Hans managed to be almost 2 minutes faster than I on stage two, but I finished second in my category (there were only six of us).

Stage three, the final part of the race, was again very technical. The upper part was difficult because the trail was not clear and you could take at least 5 different lines, and all of them were tough. Decisions had to be taken within a split second and I several times I chose the wrong line. Hans did well in this stage, he loves technical trails that need good skills on the bike. The lower part of stage 3 was exactly what he’s best at: a narrow trail, winding through the woods, steep and rocky passages with lots of roots and narrow corners. When he awaited me at the end of the stage, he had a huge smile on his face telling me, he “loved the flow of this stage”. Well, which flow I was asking myself… I was just relieved we had both made it down without any major crashes. And then I realized, I had finished my first Enduro race!

Riding bikes in Scotland is different to riding bikes in Germany. The wet and muddy conditions just make it a whole different story and it takes some time to get used to it. But as soon as you know how your bike reacts and what the downhill is going to be like, it is tons of fun! If you ever want to challenge yourself: come to Scotland and you’ll know what real mountain biking is. If you can ride here, you can ride anywhere! That’s what we’ve learned, and we totally agree!
Written by Saskia Bauer
Photos: Trevor Worsey