Based on the words Sportsman and Photographer, most of us Sportografers are often in the ‘bad‘ situation to decide between a weekend in the saddle/running shoes/ trekking boots or traveling to an event to take photos of you guys. And, well, we love both! As all those events are mostly far away from our homes, traveling by bike is not an option unless you are able to go 300km or more a day with all the equipment it takes to save your race-memories into a photo.

Some weeks ago, the case was different as Gerardmer is only 100km away from my home. La Run Attitude is an event where women of all ages participate to put down a marker for a healthy way of life and run to support institutes that fight against cancer.

So what could be better than supporting those women by showing them that even the photographer stands behind the idea of a sporty, healthy way of life?

So I left home by my bike on Saturday, prepared for the worst weather possible. 5km later, I stopped for the first time. I found a beautiful place to take a photo of. Normally I would just pass by to maintain a nice average speed, but on that day, with my cam on board, I had to stop!

After 70km the Col de la Schlucht began, not a steep climb but for my 30+kg bike and with very little training it was still quite a challenge. I was so exhausted after the wind and the rain from Freiburg to Colmar that there was not much left in the tank to climb. So I went through all those stupid ideas you get when you feel bad while climbing, I even thought about selling my bikes and buying a motorcycle. Yes, a motorcycle!

I’ve never been so happy to see the sign announcing the last km so I stopped and took a photo of it. There are a lot of great memories in my mind with all the signs of the last km I’ve seen so far but this was the first time I had a good cam in my pocket. So this is the first memory I could save to show it proudly to others. To me, this photo means I went through hell, fought all those demons in my head that told me to give up and now nothing could stop me to finish the last part of the climb! 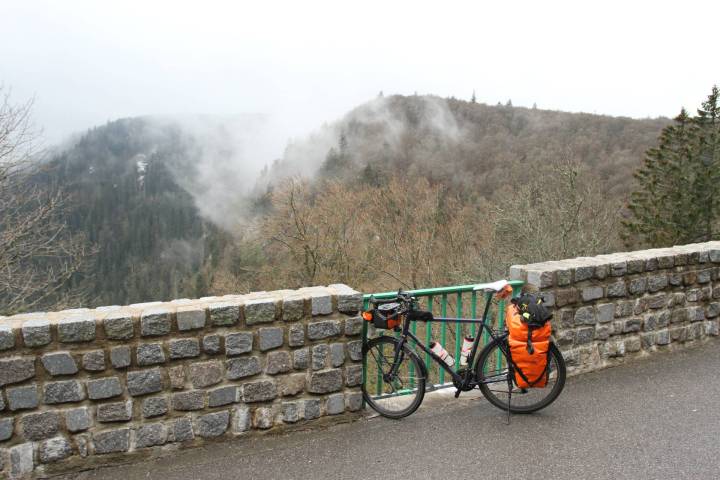 After a short but very rainy descent I arrived in Gerardmer, totally frozen and exhausted.

Thanks to Paul, promoter of this event, I had the opportunity to stay the night from Saturday to Sunday in Gerardmer. In those cold and rainy conditions this was just great! Thank you Paul, you are awesome!

Sunday morning came and before the race… there was an announcement that the photographer did 100km and climbed 1000 altimeters and went through wind and rain, just to shoot La Run Attitude! This made me so proud as I realized, now, I was a part of what La Run Attitude was about. All the stupid ideas of the day before were gone immediately and even the sun came out to provide the best possible conditions for the run.

The way home was a different one, it was not that difficult anymore and after some other sunny and rainy moments on the road, I arrived home with this good feeling left in my head and a lot of pictures from the participants of La Run Attitude telling the story of accepting a challenge and fight for it.